The One That Saved My Life

I remember standing in our family room scrolling through Facebook when I learned that Megan had breast cancer. My heart broke as I tried to understand how my old sailing friend—someone so young, vibrant, and healthy—could receive this life changing diagnosis.

A week or so after New Year’s Day, Megan gave herself a breast exam in the shower and found a pea size lump. She scheduled a mammogram at Northwestern on Tuesday and had a biopsy on Friday. On Wednesday, February 3, 2016 she was diagnosed with stage III ER/PR+ and HER2- breast cancer on her left side that had spread to her lymph nodes. She was only forty-four, a healthy eater, single, dating; she was working at Chicago Yacht Works in marketing and customer service, sailing on Lake Michigan every chance she could get; living a very fun, normal life. She describes her cancer diagnosis as “a full-on slap in the face.”

Megan and I chatted this week and I asked her if I could share her words in order to help others who might be going through a similar journey or those friends and family members who have a loved one with breast cancer.

What would you like to tell someone facing a new breast cancer diagnosis?

“Get rid of whatever your expectations are because they are going to change and become totally different; embrace the good and the bad. Reach out to friends or family you might know who have had breast cancer. Their stories and insight will help you along the way.”

Over five months beginning February 19, 2016 Megan received 16 rounds of chemotherapy followed by a lumpectomy in August. After her body recovered from surgery, she received 37 radiation treatments, finishing her final round on December 15, 2016.

Unfortunately, on March 11, 2020 Megan found out her cancer had spread to her ribs, liver, both breasts and was in the pleural fluid around her lungs; she was diagnosed with metastatic stage IV breast cancer. On March 18 Megan began receiving treatment again. After the first two rounds of treatment showed no signs of improvement, on October 6 Megan started drip chemo, alongside a Zometa drip every 3 months to protect her bones and, since her breast cancer is hormone-fueled, a Zoladex injection every 3 months to keep her in medical menopause.

What has been surprising during your cancer journey?

“When treatments don’t work. My first two treatments (anti-hormone therapy and oral chemo) didn’t work during my second diagnosis. Luckily, we tried a third treatment, drip chemo, and it’s working. It also never occurred to me how much I would have to slow down and how my attention span would decrease. I can’t work a normal job so I have to be on disability. I’ve been amazed by the unpredictability of the side effects—when they do and don’t happen. It completely floors me that walking to the car is now considered a ‘long walk’ and I might be tired and have low to no energy for an entire day. Through this experience I have really learned to rest and take care of myself.”

“Another, more fun surprise is, I’ve become much closer to a group of people I didn’t anticipate. In 1993, I graduated from Hamilton College in upstate New York. There were just over 400 people in our graduating class. Starting on a Saturday in late March, we launched a weekly zoom meet-up with 3 questions each person was asked to answer. Whoever wanted to dial in could. Each week we have six to ten alumni from California, Washington DC, New Jersey, Massachusetts, Illinois, Arizona, South Africa and Russia. We have become really close and formed a tight little covid zoom pod.”

What do you miss most about life before your second breast cancer diagnosis?

“I miss the ability to get up and walk out the door and do whatever I want without thinking about all the repercussions. I miss going for long walks, running, and popping into exercise classes. I really need to think about heading to the grocery store now and if I’m going to have enough oxygen to make it through my list.”

Megan and I joked briefly about how, due to the pandemic, no one is able to travel so it keeps her FOMO (fear of missing out) at bay. She remembers during her first cancer diagnosis feeling bad if she wasn’t up to going to an event or out to dinner. COVID-19 has taken all those bad feelings away and helped her slow down in many ways, which has been a good thing this time around.

Megan is still full of wanderlust and really misses being able to travel. The last couple of years Megan has headed to Costa Rica at the end February with some friends from her Pilates studio for a “girls surf trip”. In 2019, after physical therapy and lots of pilates, she was determined to have her weak arm be strong enough to surf—and she did it! She knows she won’t be able to surf this year but is looking forward to sitting on the beach in the sun, with her friends in a few months.

Who have been your main sources of support during this time?

“Hands down my brother Bill and sister Susan. They are incredibly supportive, knowledgeable, and helpful at giving me a reality check when I need one. We talk or text every day and they have been involved in this journey each step of the way. When you get diagnosed with cancer, especially a second time, thankfully lots of people want to help you. Having my sister visit in October and continually be the liaison to this caring group of people has been a godsend. Because I’m so tired, she is able to field calls, emails, and text messages to let folks know what I need. My brother Bill started ‘pink shirt Fridays’ when my mom was going through chemo. When she passed, Bill continued to wear pink to honor her memory. Because of covid, I have to receive my treatments alone. Each week during chemo I always have a big smile as my Facebook page gets flooded by friends and family across the globe following in Bill’s #psf footsteps by sending and posting pink photos. Without Bill and Susan, I would not be able to navigate this on my own and I am forever grateful for their love, time and dedication.” 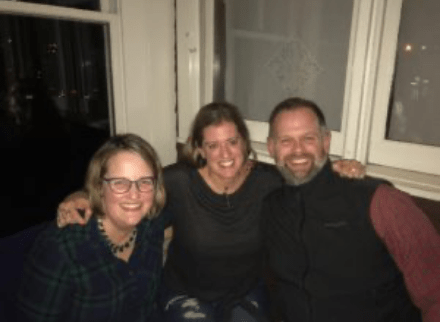 You would never know by talking to Megan that she has stage IV breast cancer. I’ve always been in awe of her infectious positivity, her optimistic mindset, and her constant bright smile. I asked Megan how she stays so upbeat:

“Because I don’t know how much time I have left, I try to make the most of it. It’s not easy because you’re given a timeframe without being given a timeframe. Of course I get irritated that this is the lot I’ve been given and I’ve definitely asked myself, ‘Why did I have to get this?’ I don’t dwell on that or ‘kicking cancer’ but rather focus on my mantra, ‘to just keep chugging’. I have a bit of anxiety about 2020 coming to an end because it marks a year of my treatment. I don’t have a choice though, I’ve been faced full on with my own mortality and I want to live the best life I can while I’m going through this.”

What recommendations do you have for people looking to support a loved one with this diagnosis?

“It’s so nice when people reach out to let you know they are thinking about you and share photos of their children and pets, but it’s vital for them to know that I may not always have enough energy to respond. It’s also important for people to be aware that I know this is hard for them too but to remember that I am the one with cancer and, even though it’s difficult and sad, they should still reach out with words of encouragement and support.

Since you asked, the best gifts I have received during this journey are statement earrings when I lost my hair, gift cards (Dunkin Donuts and DoorDash), and one of my most favorite and very practical: a portable phone charger, helpful for long days at the hospital. Since this is my second bout with cancer, I already have lots of warm blankets for chemo and I was never big on wearing head wraps. I live alone and because of the pandemic no one else is around so I don’t need a lot of big meals delivered.”

Because of Megan’s courage to post about her journey publicly on Facebook, I along with many other women were reminded to get our mammograms. Three of Megan’s friends have been diagnosed with breast cancer, one being me. I, my family, and friends will forever be grateful to Megan for sharing her story and saving my life through early diagnosis and treatment.

Please consider making a donation to the Lynn Sage Foundation this Giving Tuesday in honor of Megan and people like her who move through and share their breast cancer journey with strength, dignity, and grace.