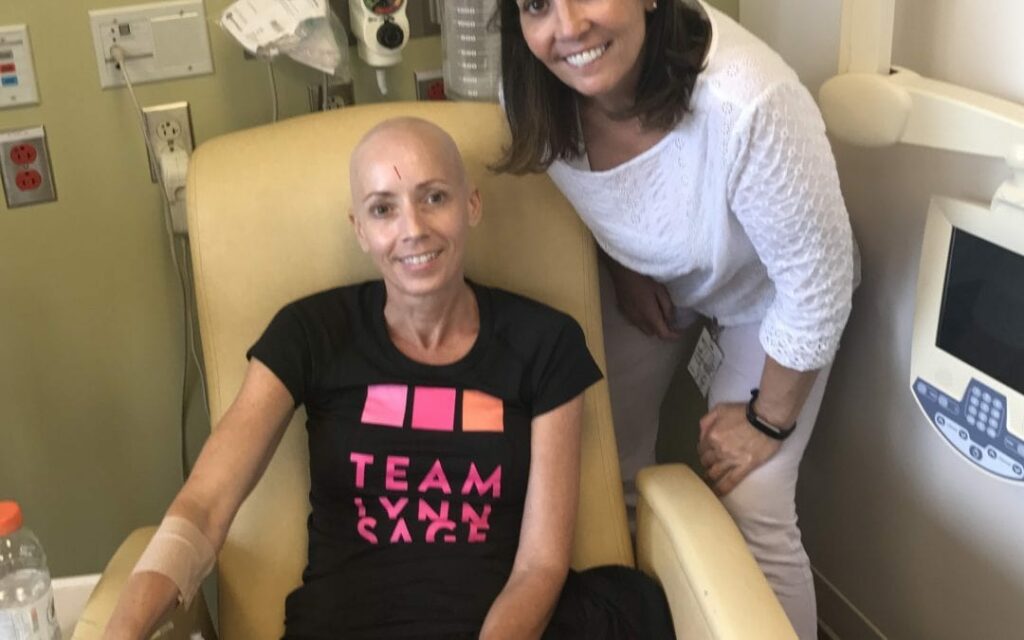 Leesa Drake’s physical accomplishments are awe-inspiring. This past spring, she was planning for her 99th and 100th marathon.  In addition to her own races, she had planned to train The Lynn Sage Foundation running team. She joined Team Lynn Sage during the 2016 Chicago Half Marathon and, this year, leads our inaugural Bank of America Chicago Marathon eleven-person team.

Leesa’s commitment to physical fitness is impressive, but she is proving an unstoppable force against her current challenge.

“I was happy to get involved with The Lynn Sage Foundation last year. One in eight women getting a breast cancer diagnosis is sobering. I know women. I knew women. That’s a lot of people. You’d be dodging a super big bullet to never have to deal with breast cancer, but even still, I wasn’t suspecting it would be me.”

This past spring, Team Lynn Sage members received an unexpected email right as their training season started. Leesa shared her recent breast cancer diagnosis, course of treatment, and her commitment to stay involved with the team.

“I’m none of the risk factors. I did everything right. The initial diagnosis was Stage 1 breast cancer, requiring surgery, but no chemo or radiation. After surgery, that was changed to Stage 3, adding both chemo and radiation to the plan. I’m halfway through chemo now, but I am still planning to run in Chicago. I know I’m pretty stubborn, so I’ll do what I can to be ready and talk with my doctors about the risks. So far, they have been really supportive. After the race, I’ll still have two more chemo sessions, followed by five weeks of radiation.”

While Leesa adjusted her time commitment with Team Lynn Sage to focus on treatment, she has remained its biggest cheerleader. Personally, her diagnosis also meant reevaluating significant personal goals.

Leesa’s plan to run her 99th marathon in Chicago with Team Lynn Sage, followed a week later by her 100th in Connecticut, started to seem ambitious given her treatment schedule. Leesa decided to postpone her 100th until she can run it completely healthy and in an amazing location as a celebration. True to her determined and positive attitude, her commitment to continued training throughout treatment paid off and Leesa’s doctors remained supportive of her goals. At the most recent meeting with her oncologist, his response to this Sunday’s marathon was, “Go for it!”

“This will be my 99th marathon. I’ve learned a lot along the way. A friend from running gave me a life lesson that applies in both a race and while undergoing treatment: ‘There are highs and lows and neither one will last. Manage the ups and downs, but don’t overreact to either.’”

Every day, Leesa proves this to be true. Sharing detailed updates about her journey on Facebook, she inspires hundreds of people, including The Lynn Sage Foundation community.

“I’ve really put my story out there on Facebook. Keeping people informed helps and the unexpected wonderful groundswell of support is really helpful. I have drawn so much from that and am so grateful. There are parts of this process, both my treatment and living my life around treatment, that have been harder than I thought they would be. There have been some really hard days. I try to focus on the next thing, not all the things. I’m a planner — I like calendars and planning — so that mindset challenges me to keep my head in check.”

Mentorship from friends who are also breast cancer survivors is invaluable to Leesa. “I’m grateful I have friends who’ve had this challenge ahead of me and give great advice. Now I use my story in my Lynn Sage Foundation fundraising because it’s just more personal. The Lynn Sage Scholars are doing really important work so that the 1 in 8 don’t have to worry so much. I have advantages now in my treatment compared to friends who went through this even just a few years ago.”

One year ago, Team Lynn Sage advisor Leesa Drake ran her 99th marathon to support breast cancer research while undergoing treatment for her own breast cancer. She was and continues to be an inspiration and will run with us again at this year’s Bank of America Chicago Marathon.

Leesa’s story generated so much interest, within The Lynn Sage Foundation community and locally, that we caught up with her for an update:

How is your recovery going?

“I’m feeling great. I finished chemo at the end of October 2017 and radiation in the middle of December 2017.  I had to wait several months for my radiated skin area to heal before I could have my final surgery to finish reconstruction, which happened in August.  I’m really done.  I take one pill a day and will have a few follow up appointments with my doctors, but treatment and recovery are really all behind me.” 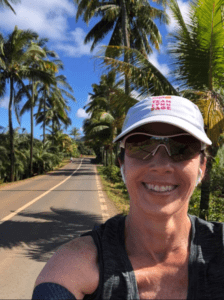 What important milestones have you already achieved or are looking forward to?

“There aren’t really any additional milestones ahead except to celebrate the many more years I have as a result of catching my breast cancer early and making treatment choices that allow for the lowest possible chance of recurrence.  My son is eight-years-old and I need to be here, so all my choices were made with that in mind.

In terms of how I’m *feeling* about all of it, I am still processing this experience.  When I was first diagnosed, it was important to get busy learning about my treatment options, talking with my doctors about what I needed to do, and all the work that goes along with those things.  I didn’t take much time to just think about what was happening. I got to work trying to get past it.  It wasn’t until the end that I started to really feel that I had been through something big.  I think it was my way of protecting myself from being afraid. I felt like I had a lot of thinking to do when treatment was done and the experience of what I had been through finally started to sink in.”

What would you like to tell someone facing a new breast cancer diagnosis?

“I’ll share the same advice that another breast cancer survivor shared with me — ‘It’s not all bad.’  I wouldn’t wish it on anyone, but in spite of all that is difficult about treatment, I also discovered how wonderful people can be.  I met so many great people along the way — from doctors and other medical professionals to other patients who were also going through treatment. I had so many friends, coworkers, and family members really step up to be helpful or to show me they care. They sent meals to my family, came to chemo treatments with me, sent cards, or just texted to check on me now and then.  I’m so grateful for how wonderful people were during this difficult time.

I would also encourage anyone with a breast cancer diagnosis and facing treatment to keep living while you do it.   Keep working, keep socializing, keep running marathons (if that’s what you’re into).  There will be hard days when you’ll need more rest, but it really helped me mentally to keep doing as many ‘normal’ things as possible.  Breast cancer was one aspect of my life — it wasn’t my entire life.  Take it seriously and do everything you need to do to treat it, but don’t let it take over.”

What recommendations do you have for people looking to support a loved one facing this diagnosis?

“Don’t feel you have to have the perfect thing to say.  Just say ‘Cancer sucks. How are you doing? What can I do to help?’  Check in now and then. It’s a long road when you’re in it and feels like it will be a long time until treatment is done. Some people will disappoint you. Cancer is too much for them, but that’s only about them — not you.  A few friendships came to an end for me, which was sad. I tried not to dwell on it and instead focused on the vast majority of people who were so wonderful.  These were the people who — and I’m not kidding — even made cancer a little bit fun. They came over to visit, they went to chemo treatments with me, they ran some portion of last year’s Chicago Marathon with me, they told me bad jokes and laughed at my cancer humor, they showed me their vacation pictures or baby pictures, and they were just present.  It helped more than I can even articulate.”

Support Leesa and others facing a breast cancer diagnosis in this year’s Bank of America Chicago Marathon. We’d love to have you join the Team Lynn Sage cheering section at Mile 7.5 (just north of Belmont and Lake Shore Drive).